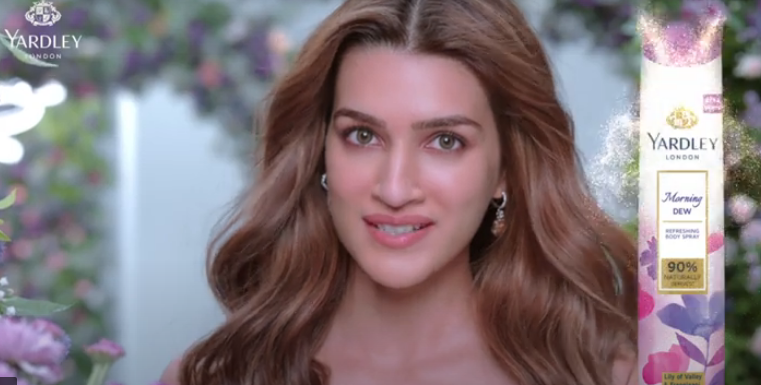 Yardley has roped in Bollywood actor Kriti Sanon as its brand ambassador for its new campaign conceptualised by Contract Advertising, a part of the Wunderman Thompson Group and member of the WPP network. Featuring in the television commercial (TVC) about the concept of nature like freshness, Kriti is seen as a confident and independent young woman, stepping up to take on the world. The TVC has launched across multiple channels across regions, including digital. An extensive print campaign has been planned along with prominent presence across general trade, modern trade and ecommerce sites generating 360-degree visibility for the new campaign.

Yardley, with 250 years of legacy in fine fragrances, has continually evolved to remain true and relevant across generations. It believes in inspiring women to showcase their true potential and step up to the best version of themselves.

Recognized today as a self-assured young star, Kriti Sanon is a woman with a powerful voice, striving to create a difference. Speaking on her association with the brand, Kriti Sanon, says, “Nature has its own way to light you up. Imagine if this feeling lingers all day long! That’s how soothing and refreshing Yardley is. I am really excited to jump into the floral world of Yardley London.”

Manish Vyas, Business Head of Yardley India, reveals the strategic approach behind this new campaign, “The brand takes pride in using the finest natural ingredients and exotic flowers from gardens of England across its portfolio. Keeping this in mind, we came up with the campaign thought of ‘nature like freshness’, highlighting what goes into Yardley fragrances that makes them distinct and desirable. As a part of relaunch, Yardley deodorants are now made of 90% naturally derived* ingredients and we are introducing 2 new fusion variants – Scottish Meadows and Spring Blossom. To bring this campaign alive, we partnered with Kriti Sanon, who epitomizes authenticity and is a true inspiration for the woman of today.”

Ayan Chakraborty, General Manager, Contract Mumbai, shares the inspiration behind the commercial, “There is something magical about fresh flowers and their smell. They have a transformative effect on both mood & confidence. This is what we played up in the narrative since Yardley deodorants have natural floral fragrance that makes you feel fresh and confident.”

Rahul Ghosh, Executive Creative Director, Contract Mumbai, explains the approach and the creative thinking behind the ad, “Yardley is a legacy brand and its legacy is fragrance and flowers, and the positioning of Yardley in India is about creating step-up moments for its target audience. The story beautifully brings together how the fragrance of Yardley transforms and creates the world of flowers and creates a step-up moment for our protagonist”.

The new & improved Yardley deodorants will be available at the nearest stores and on ecommerce platforms for Rs. 209 for 150ml.