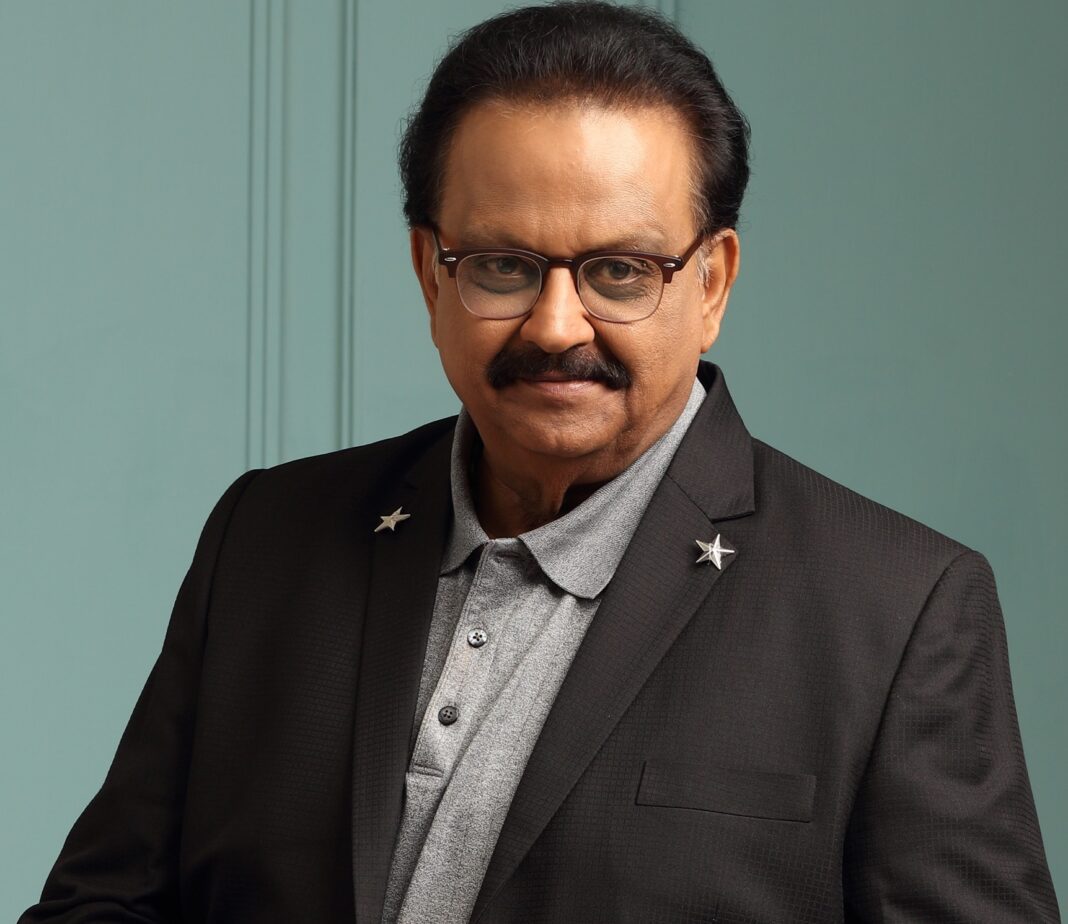 His was the voice of eternal youth. From the time he struck a chord in the national musical consciousness with the 1980 hit Telugu film ‘Shankarabharanam’, directed by the legendary K. Vishwanath, where he brought to life some of South Indian cinema’s most enduring songs and for which he received his first National Film Award for Best Male Playback Singer to the time he breathed his last today, Padma Shri Sripathi Panditharadhyula Balasubrahmanyam, or SPB as he was fondly called, was the quintessential people’s musician. In 1981, he debuted in Hindi with “Ek Duuje Ke Liye” in the eponymously named film directed by another legend K. Balachander. SPB bagged his second National Film Award for Best Male Playback Singer for this number. SPB had arrived.

SPB passed away today, September 25, 2020, owing to complications his body developed in the wake of a Covid-19 infection he had contracted last month. He was 74. Besides He leaves behind a formidable legacy of over 40,000 songs in 16 Indian languages.

In a career spanning over 50 years, SPB was honoured with six National Film Awards for Best Male Playback Singer and countless other awards for his works in Telugu, Kannada, Tamil, Malayalam, and Hindi. SPB was also conferred two of India’s top civilian awards, namely the Padma Shri (2001) and the Padma Bhushan (2011). He also won the Bollywood Filmfare Award and six Filmfare Awards South. As recently as 2016, SPB was conferred the Indian Film Personality of the Year award.

SPB was born on 4 June 1946 in Nellore into a Telugu family to S. P. Sambamurthy and Sakunthalamma. His father was a Harikatha artiste, who also did plays. One of SPB’s sisters is the singer S. P. Sailaja. SPB leaves behind his wife Savitri Balasubrahmanyam, daughter Pallavi Balasubrahmanyam, and son S. P. Charan, who is also a well-known South Indian singer, actor, and producer.

In the 1980s, SPB began to record more songs in Tamil, especially alongside the legendary S. Janaki for music maestro Ilaiyaraaja. Incidentally, it was Janaki who had spotted SPB’s talent at a music competition held in Chennai sometime in 1965. (In 1965, SPB began his career in Telugu and Kannada film music.)  Throughout the 1980s, the Ilaiyaraja-SPB-Janaki trio dominated film music in Tamil. Most of the songs were Carnatic-based, such as in ‘Saagara Sangamam’ (1983), for which both Ilaiayaraaja and SPB won National Film Awards, ‘Swathi Muthyam’ (1986) and ‘Rudraveena’ (1988), which again fetched National Awards for Ilaiyaraaja and SPB.

1989 was another breakthrough year for SPB, who sang “Dil Diwana” for Bollywood actor Salman Khan in the blockbuster ‘Maine Pyar Kiya’ and won a Filmfare Award for Best Male Playback Singer. Through the 1990s, SPB became the “romantic voice” on the soundtracks of Khan’s films. Among the biggest box-office hits was ‘Hum Aapke Hain Kaun’, where “Didi Tera Devar Deewana”, SPB’s duet with Lata Mangeshkar became a mass hit. In fact, SPB became Salman Khan’s voice in the 90s!

In the 1990s, SPB went on to work with some of the most biggest composers of the day, such as Vidyasagar, M. M. Keeravani, S. A. Rajkumar, and Deva among others. But the most sensational of his partnerships came about with contemporary legend A. R. Rahman.

SPB sang three outstanding songs for A. R. Rahman in his debut film ‘Roja’ of which “Kadhal Rojaave” is a cult classic. Some of his other outstanding numbers include “July Maadham” from ‘Pudhiya Mugam’, “Mannoothu Manthayilae”, a folk composition, from ‘Kizhakku Cheemayile’, “Anjali Anjali” and “En Kadhale”, among other songs, in the musical love story ‘Duet’, and “Thanga Thaamarai” from ‘Minsara Kanavu’ which earned him the sixth National Film Award for Best Male Playback Singer.

In 2013, SPB sang the the title song for ‘Chennai Express’ the eponymous “Chennai Express”, singing for Shahrukh Khan, under the music direction of Vishal-Shekhar. That marked his return to Bollywood after 15 years.

In May 2020, SPB sang a song titled “Bharath Bhoomi”, composed by Ilaiyaraaja, as a tribute to the police, army, doctors, nurses, and other frontline health workers who worked selflessly during the ongoing pandemic.

Tributes have been flowing in, in the wake of SPB’s passing. “Devastated”, said A. R. Rahman on his twitter handle.

“Balu sir… you have been my voice for many years… your voice and your memories will live with me forever… I will truly miss you…”, said superstar Rajinikanth.

In a video tribute, Kamal Haasan said that “SPB’s fame will live on for another seven generations”.

Veteran actor Venkatesh Daggubati tweeted: “Extremely sad to hear the news of SP Balasubramaniam Garu’s passing. We have lost a legend today. I’ve had the privilege to work with him in some of my best movies like ‘Prema’ and ‘Pavitra Bandham’. Your legacy will live on Sir! My heartfelt condolences to the family. RIP.”

Actor Mahesh Babu said: “Unable to process the fact that #SPBalasubramaniam garu is no more. Nothing will ever come close to that soulful voice of his. Rest in peace sir. Your legacy will live on. Heartfelt condolences and strength to the family.”

“Today is a dark day for the music industry as a whole… It is a huge loss. His voice was very beautiful. He was a very happy person,” wrote actor Radikaa Sarathkumar, who had acted alongside SPB in a few films. “I had hoped he would come back… His voice will last until eternity.”

Singer Srinivas remembered SPB as ‘Bheeshmapitamaha’, a fatherly figure to everyone in the music industry. “We hoped he would come back. It’s hard to imagine a world without SPB. But we still have his songs. Nobody can be without listening to his songs even one day. There’s nobody who can replace him,” he said.

Playback singer Hariharan referred to SPB as a ‘brother’, who taught him punctuality, sincerity, and how to make a song one’s own. “His recording for shows used to be perfect. It was such an inspiration. He sounded like 45 though he was 75. He’s amazing. He was a very nice person, he’d help anyone who was in need. He was such a kind-hearted person. We’re all shocked,” he said.

Actor Prabhu said” “I am what I am because of the countless hit songs you have blessed your voice with, I will miss talking to you anna. God bless your soul.” “Heartbroken!! RIP SP Balu garu,” wrote Telugu superstar Chiranjeevi in a tweet.

Anil Kapoor recalled that the legendary singer had dubbed for him in his Telugu (Vamsa Vruksham) and Kannada film (Pallavi Anu Pallavi). “Great human being and an incredible singer…Lucky to have had him dub for me…give his voice to my performances in my first Telugu and Kannada film. S P Balasubrahmanyam will be missed truly…my heartfelt condolences and prayers to the family,” he wrote.

“Deeply saddened to hear of the demise of Shri S P Balasubrahmanyam. My heartfelt condolences to the family. We have lost one of the most talented artistes of our times. Rest in Peace Sir,” tweeted Aamir Khan.

“SP Balasubrahmanyam Sir’s voice dominated my initial years of cinema. He, of course, had been a legend from long before. Sad to learn of his passing. Condolences to his family,” wrote Ajay Devgn in his tweet.

Many of Madhuri Dixit’s films, had tracks sung by SPB. “End of an era… Your voice will always remain in our hearts S P Balasubraniam ji. The way you weaved magic with your music is unmatched. Rest in peace and my heartfelt condolences to the family in grief,” wrote the actress.

Salman Khan said: “Heartbroken to hear about S P Balasubrahmanyam sir… you will forever live on in your undisputed legacy of music! Condolence to the family #RIP.”

“Really sad to hear about the passing away of such a great yet simple person. He was my first sponsor! He sponsored our team Chennai Colts in the national team championship in 1983. One of the nicest persons I have met. His music gave us such joy,” said chess grandmaster Viswanathan Anand.

“The joyousness and the smile he brought into his singing is what made his voice remain young. His voice was an ageless one — with a smile,” said close friend, collaborator, and filmmaker Rajeev Menon.

That sums up SPB: ageless.

SPB shall live on.