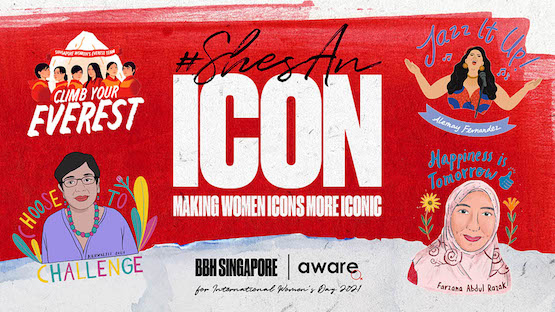 #ShesAnIcon is the campaign where the two organizations will collaborate with locally based women illustrators to launch a series of online GIF stickers that seek to celebrate and valorise Singapore’s women role models. The women icons who will be featured as part of this campaign include Farzana Abdul Razak who has triumphed over a plane crash tragedy and gone on to live her life to the fullest, Jeanette Aw who has made a mark in the male-dominated filmmaking industry, Kanwaljit Soin who was Singapore’s first female nominated Member of Parliament, Alemay Fernandez who is the only Asian singer to have performed with three of the top jazz orchestras in the world and the Singapore Women Everest Team who pushed themselves through the toughest physical conditions to make it to the top of the world. Each illustration will feature an inspirational phrase or quote spotlighting the achievements of each icon.

Inspired by research conducted by BBH Singapore, it revealed that only one in ten Singapore women have a Singapore woman icon.  The ongoing research that has amassed 600 responses so far from women between the ages 16 to 54 (and above) has shown that the vast majority of Singapore women would pick a celebrity from the West, including Michelle Obama, Gal Gadot, and Ariana Grande.

Talking about the idea behind the campaign, Amanda Lim, Senior Strategist, BBH Singapore said, “Stickers and memes are very much vehicles for culture today. Iconic illustration stickers featuring women role models such as Kamala Harris have amassed upwards of 22.5M views each, demonstrating the immense power of stickers in inspiring the next generation of women. As an agency that believes in using creativity to make a difference, we wanted to honour admirable women in Singapore by giving them a well-deserved place in popular culture. The greater goal is for women in our country to feel represented and be able to see themselves in these role models. We are thankful to AWARE for extending their support to this initiative. As an authority on gender equality they were natural partners for this initiative.”

Commenting on the partnership, Kelly Leow, Communications Manager, AWARE, said, “We are excited to partner with BBH on this meaningful initiative that puts a spotlight on women role models in Singapore and celebrates them in a fun yet culturally impactful way. For too long, stories of Singapore women have been out of the mainstream limelight. Our hope is that these stickers would inspire fellow Singapore women to continue making strides and telling their stories.”