AMAZON IS NO FOREST

Jeff Bezos speaks to India’s market that is no Garden of Eden for the world’s biggest retailer but announces a US$1 billion investment to help digitise small and medium businesses in India with a promise to use the e-com giant’s global footprint to export $10 billion worth of ‘Make-In-India’ goods across the world by 2025. 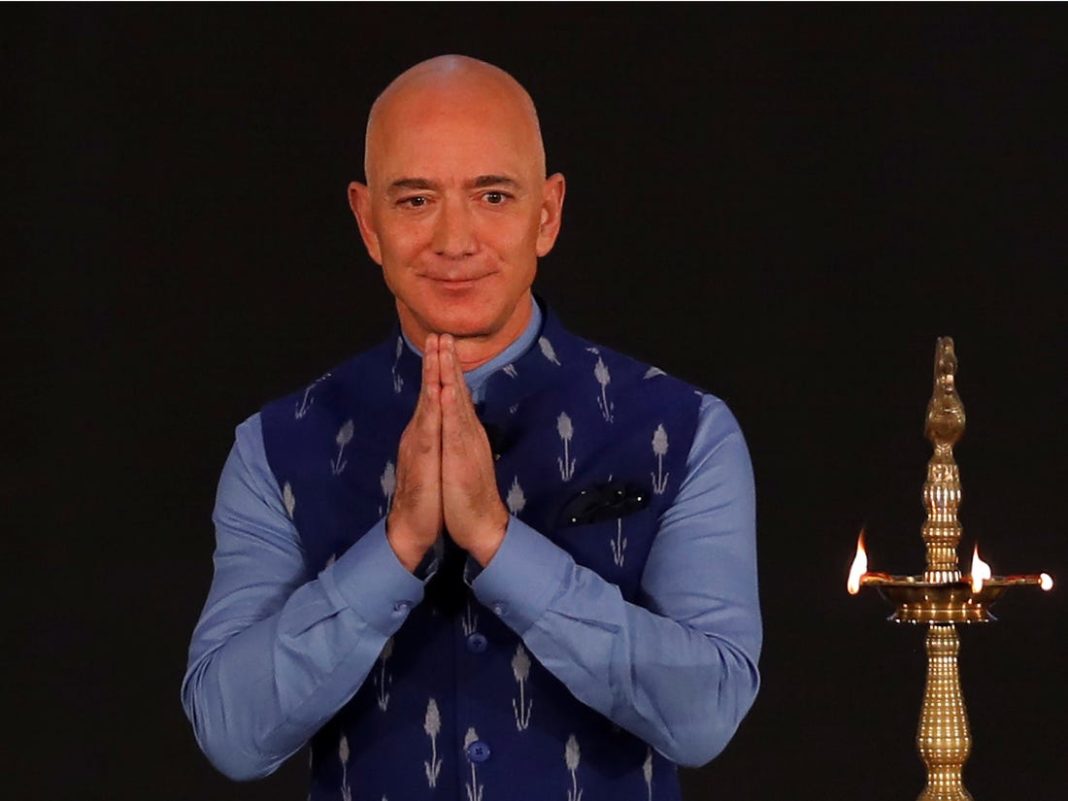 Bezos, Jeff Bezos, began his day in India by flying kite with a bunch of boys in Delhi. Not quite untangentially though, Bezos, for a while now, has been planning something higher than a kite in India, which is what led him to open Amazon’s ‘Amazon Smbhav’, a two-day summit (15-16 January 2020) for small and medium businesses and owners of India.

But Bezos’ high-profile visit has not been without incident despite his commitment to invest $1 billion (about Rs. 7,000 crore) to digitise small and medium businesses in India and a promise to use the e-commerce giant’s global footprint to export $10 billion worth of ‘Make-In-India’ goods across the world by 2025. Since Amazon’s entry into the Indian market in 2013, it has invested $5.5 billion.

Bezos’ visit attracted protests in Delhi and elsewhere, with protestors who are small traders and small and medium-scale business owners saying Amazon is undercutting business owners in price and driving them out of business. The Confederation of All India Traders went on to describe Bezos as an “economic terrorist”.

On the regulatory side, India’s Competition Commission already had opened an investigation into Amazon’s business practices after small traders complained about the power the company wielded over the market. The Commission is also investigating Indian e-commerce company Flipkart, Amazon’s principal rival in the Indian market place. As of 2018, Flipkart, which was in 2018 acquired by Walmart for $16 billion for a 77% stake, had 31.9% of India’s market share with Amazon within whispering distance at 31.2%, according to Forrester data quoted by S&P Global Market Intelligence.

At the inaugural of Amazon Smbhav, Bezos, the Founder and Chief Executive of Amazon, who was named the first “centi-billionaire” on the Forbes Wealth Index in 2018 having built a net worth of $150 billion (as of August 2019 he was worth $117) spoke at some length about the Amazon story in a conversation with Amit Agrawal, Country Head, Amazon India.

Referring to how he scaled up with the right people, Bezos said, “But when the company gets bigger than that you try and stop figuring out what to do, but you figure out the ‘who’… You got to choose the leaders, so the big question becomes the who question. So from the question of how to what to who — that has been my progression. And I will tell you the who is so valuable for me because I have always been figuring out…

Make sure you are not only hiring people that you can teach, but hire people that can teach you and can be your tutors. That has been the secret to the scaling of Amazon all along the way.”

When asked about failure and how he dealt with it, Bezos said, “Amazon is the best place in the world to fail… And the reason for that is we have a lot of practice. There are two kinds (of failure) that are really important — one while experimenting, where you are trying to figure out something new that nobody in the world has done before. That is high-quality failure”

Explaining further, Bezos said, “In fact, if you know something that something is going to work, then it is not an experiment… you need to do as many experiments as you can because that’s how you get innovation. Innovation is all about maximising the rate of experimentation. and you need to have a culture that supports failure.”

So, what was the second kind of failure? “There is this failure you should try to avoid — and that is operational excellence failure. When we go to open a new performance centre, for example, we know how to do that. If we fail at that, that is just bad execution and you should never celebrate that kind of failure.”

Building on a philosophical view of failure, especially on the “second kind of failure”, Bezos said, “If that happens then we should tell ourselves that let’s look I the mirror, let’s be self-critical… we got to acknowledge that that was a bad kind of failure. So when we talk about the first kind of failure we are talking about inventing, experimenting… accompanied hand in hand by a willingness to fail… By the way even if failure is good, it can be embarrassing, it doesn’t feel good… it was a great idea but nobody came to the party… But here is the great thing about failure — one success, one winner can pay for dozens and dozens of failures. And that is why we should fail.”

Referring to how he visualised it then and now, Bezos said, “25 years ago, Amazon was a tiny little company, not only was I driving packages to the post office, but I was also wrapping them and doing everything that small entrepreneurs do. Today we are announcing that we are going to invest an incremental $1 billion USD in digitising small and medium businesses and we will use Amazon’s size, scope and scale. We are going to use our global footprints to export 10 billion USD ‘Make In India’ goods by the year 2025. The goal is to make more people participate in the prosperity of India.”

What does the future hold for India? Bezos said, “I predict that the 21st century is going to be the Indian century… The dynamism, the energy… this country has something special in its democracy… One more prediction — in this 21st century the most important alliance will be the alliance between India and the United States — the world’s oldest democracy and the world’s largest democracy.”