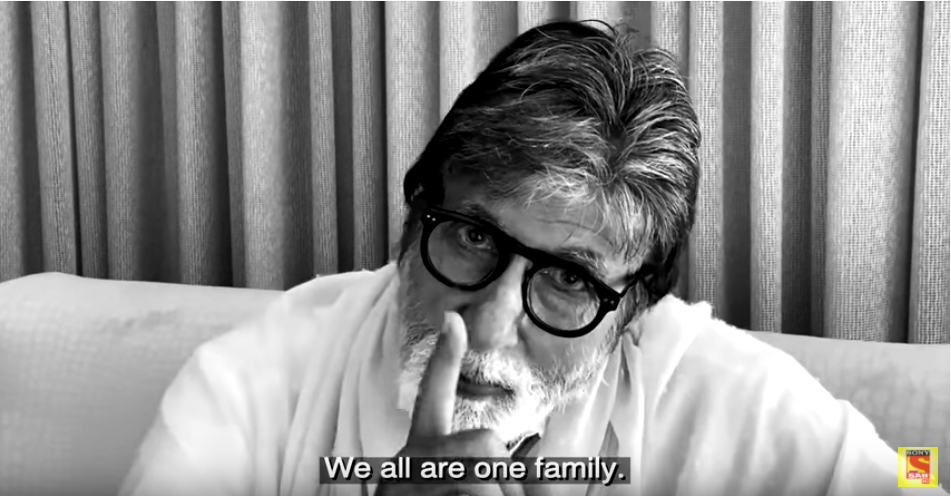 Indian superstars come together, but away from each other at their own homes, and put together a made-at-home movie to encourage citizens to stay home during the COVID-19 national lockdown.

Family, a “made-at-home” short film, courtesy of Sony Entertainment Television, featuring some of India’s top film stars, such as Amitabh Bachchan, Rajinikanth, Ranbir Kapoor, Priyanka Chopra, Alia Bhatt, Chiranjeevi, Mohanlal, Mammootty, Sonalee Kulkarni, Prosenjit Chatterjee, Shiva Rajkumar and Diljit Dosanjh, attempts to motivate and encourage Indian citizens to stay home during the national lockdown to help the collective cause of curbing the Coronavirus that has, at the time of writing, claimed nearly 75,959 lives worldwide. In India 137 lives have been lost until today.

The serious message of #StayHomeStaySafe message has been built around and revealed through a simple, yet quirky story.

Pandey says how after he approached Amitabh Bachchan with the idea, the actor urged him not to stop at messaging alone but to get in sponsors and widen the initiative and its reach. In fact, Bachchan called up Sony and Kalyan Jewellers, who came in as sponsors, and also spoke to a number of other stars in other languages, Pandey says.

Pandey also says how Ranbir Kapoor and Alia Bhatt were much enthused by the idea, urging him to “make it bigger… and pan-India”. They also spoke to film stars in other languages.

As far as the ideation and storyboard was concerned, Pandey made a “template film” out of his home, indicating the type of shot/s he wanted from the actors. He sent out the template to the stars on the 2nd of April, urging them to shoot their parts at their homes on the 3rd of April.

Who shot the actors? Pandey says that while Bachchan was shot by Abhishek Bachchan, Alia was captured on camera by Ranbir who, in turn, was shot by Alia. Priyanka Chopra was filmed by Nick Jonas while southern great Rajinikanth was shot by his daughter Soundarya Rajinikanth herself.

Pandey said that by the time the clips came in, it was April 6 even as the film had to go live on April 7. Thereafter, it was a race against time as Pandey and his team sate down to work at their respective homes. His editor Shyam Salgaonkar (Sally) and online artiste Amit Chitnis ploughed through the intervening night before the release editing the clips, which Pandey would again “redirect” and ask for further edits until the finish.

Music was scored by Dhruv Ghanekar with whom Pandey has had a long creative association. “Dhruv and I have worked so much with each other that we knew our way around it and we said okay, we can do this,” Pandey was quoted as saying.

Through the initiative, the Indian film industry has sought to come together to pledge support and sustenance to over 100,000 daily wage earners in the industry for a month. The All India Film Employees Confederation has put together a commercial tie-up with a leading chain of hypermarkets and grocery stores and verified and accredited workers will be provided rations for a month through digitally barcoded coupons.