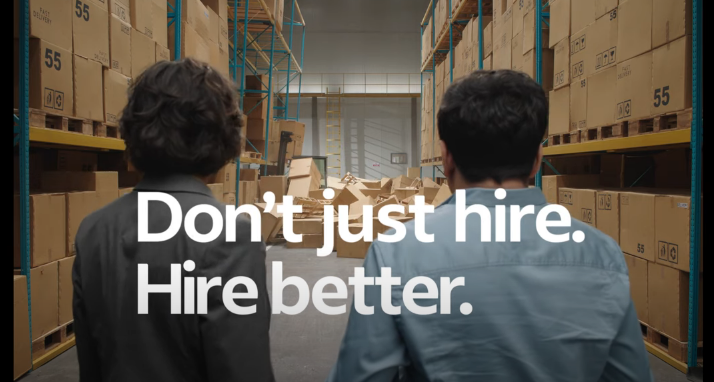 Indeed, the world’s #1 jobs site has unveiled a new campaign, ‘Don’t just hire, HIRE BETTER’. Through a series of humorous videos, Indeed’s new campaign highlights the issues that companies face if one does not rely on proper recruitment tools to hire employees.

The ad campaign goes live in 6 key cities – Delhi NCR, Bangalore, Ahmedabad, Indore, Patna, Lucknow and multiple local languages. The series consists of three ads and showcases hilarious goof-ups when hiring through referrals in three different scenarios. The concept pulls from the insight that while there’s a shift in online recruitment for SMBs, oftentimes SMBs still rely on their 1st party sources to hire. In fact, data from Indeed’s survey showcased that 7 out of 10 SMBs in India prefer hiring employees through personal references. The videos and print ads show a humorous approach to workplace scenarios gone wrong when hiring outside of Indeed.

Conceptualized and created by DDB Mudra the ad campaign is directed by Vivek Kakkad. The ad films and creatives will be spread across various digital and print platforms that employers and job seekers choose to watch such as YouTube and physical press across regional and national newspapers.

The need to hire better

Though the past couple of years have been challenging for SMBs, many of them have used the pandemic as an opportunity to lay the foundation for a strong digital future. Traditionally, SMBs have been competing continuously with not just other small businesses but also large enterprises for talent. They tend to have an attitude of choosing resources based on personal relationships such as ‘Chacha ka ladka bahut hoshiyaar hai’ which is showcased in this ad campaign. To compete successfully in the era of digitization, a skilled workforce is the need of the hour, making it all the more important for SMBs to hire the right talent to aid in their transformative growth journey.

Indeed for SMBs bring hiring solutions within reach of Indian entrepreneurs. SMBs can access Indeed’s vast pool of job seekers and use Indeed’s unique products and features to find the right fit for their business.

Indeed, the world’s #1 job site is set to transform the recruitment process for small and medium businesses in India. In its bid to connect emerging companies with the right talent, Indeed India offers its unique platform, attracting over 250 million job seekers, to budding entrepreneurs, in order to address their hiring needs.

The Small and Medium Business sector forms an integral part of the economy, making a significant contribution toward integral economic indicators such as the nation’s GDP and employment, to name a few. The rapid growth of the sector has resulted in job creation across various sectors.

“Our campaign is focused on reaching out to SMBs – the high-growth market in India. This campaign will address their concerns regarding hiring employees, through a series of relatable films which resonate with them. Indeed provides easy hiring solutions for SMBs and aims to constantly innovate to help these companies find the right talent through its platform,” said Nishita Lalvani, Director, Indeed India and SEA.

“Hiring in small and medium businesses in India gets done through word of mouth over legitimate channels. And this may turn out to be a problem since the owners appoint employees with mediocre aptitude, causing potential losses for the businesses. The objective of this campaign was to target SMB owners specifically and encourage them to subscribe to the platform. Thus, changing their typical approach towards hiring and their standard practice of appointing someone they know instead of hiring someone who knows what to do,” said Sooraj R Pillai, Senior Creative Director, DDB Mudra

According to Indeed’s survey data, SMBs are expected to create 2 million jobs in the next 5 years. The Indian hiring ecosystem also is undergoing positive growth with employers increasing hiring by 29% in April to June 2022 in the face of global inflation. The campaign aims to solidify the need for SMBs to hire right to continue the positive growth trajectory.