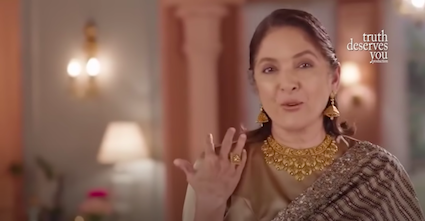 Tanishq, the popular Indian jewellery brand from the house of the Tata’s, has unwittingly walked right back into another spot of  controversy with a number of people running #BoycottTanishq on Twitter for an ad film the company had just released drawing attention to the importance of celebrating a ‘no-cracker’ Diwali this year given the pandemic and the severity of general environmental conditions.

It was only in October that Tanishq was at the receiving end of a massive backlash from right-wing netizens for promoting the message of interfaith matrimony. The commercial was subjected to heavy trolling following which Tanishq was forced to withdraw the ad.

Tanishq has once again come under fire on social media, this time for an ad promoting a cracker-free Diwali.  The new ad film that features actors Sayani Gupta, Neena Gupta, Alaya Furniturewala, and Nimrat Kaur is for its ‘Ekatvam’ (oneness) collection. The film shows the four actors speaking about how they would celebrate Diwali this year.

However, this time the offence apparently has been on account of a line in the ad said by Sayani where she promotes cracker-free festivities. The line, “Definitely no firecrackers, and I don’t think anyone should light any firecrackers, but a lot of diyas, a lot of laughter hopefully and positivity”, did not go down with a   section on Twitter.

The actor had also taken to her Twitter handle on November 8 to promote a cleaner Diwali and wrote: “This Diwali, instead of bursting a firecracker, use that 5, 20, 200, 2000 rupees to buy a mithai or a dabba of sweets for someone who can’t afford to buy it, buy them two diyas so they also feel like it’s a special day. Do it. And see how you feel.”

C. T. Ravi, a BJP general secretary and MLA from Chikkamagaluru in Karnataka, wrote, “Why should anyone advise Hindus how to celebrate our festivals? Companies must focus on selling their products, not lecture us to refrain from bursting crackers. We will light lamps, distribute sweets, and burst green crackers. Please join us. You will understand Ekatvam.”

Responding to the controversy, Congress leader and Thiruvanthapuram Dr. Shashi Tharoor had said on his Twitter handle: “If such people are so infuriated by Hindu-Muslim ‘ekatvam’, why not boycott the world’s longest-surviving symbol of Hindu-Muslim unity: India itself?”

Speaking to the media late last month in the wake of the earlier Tanishq ad, Tejas Mehta whose digital agency What’s Your Problem had designed the two ads, had said: “As a student of the industry I’m working in, advertising has always been about going out and playing a pivotal role in changing consumer behaviour. It was about showcasing the possibility of a world that could be… Wear a shirt to gain confidence, spray a deo to get the girl of your dreams – all these advertising messages are about creating aspiration and a world of possibilities. That’s what a piece of communication should be doing, that’s what our communication is doing too.”