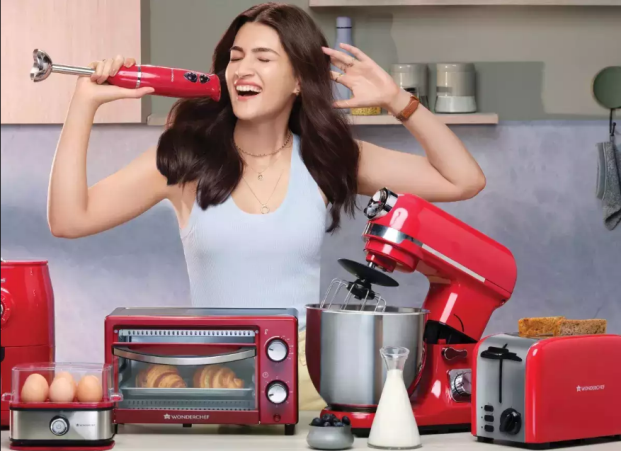 Wonderchef, one of the trusted cookware brand has announced the appointment of Kriti Sanon as its brand ambassador. The company will soon launch a TVC simultaneously across multiple channels including digital.

An extensive print campaign is also planned along with a prominent presence across general trade, modern trade and exclusive brand outlets. This will create 360 degree visibility for this new association.

Sanon has embarked on this new journey with Wonderchef to spearhead the company’s vision of building a vibrant brand that not only focuses on health but also on the innovation and modern outlook, the company said in an official statement. “Kriti personifies Wonderchef’s values as a health oriented, innovative and contemporary brand. Her versatility cuts across genres and geographies which is in line with the company’s strategy of reaching a wider audience all across India. Just like Kriti, the brand believes in evolving continuously and coming up with newer, better appliances and cookware,” it added.

Welcoming Sanon to the team, Ravi Saxena, founder and managing director, Wonderchef, said, “The engagement with Kriti will amplify our efforts to create more awareness about healthy cooking and capture wider demography. Taking Kriti as our brand ambassador was a natural choice for us because Wonderchef relates with Kriti as a self-made independent person with a mix of modern and traditional values. The vividness of her persona and the finesse with which she connects with the audience make her the ideal choice for strengthening our positioning. She brings glamour, universal appeal and feminine touch to the brand.”

Saxena further stated that Wonderchef is a modern and progressive brand. “Our customer is broad minded and believes in gender equality. Our campaign enhances this positioning where Kriti involves her friend in co-creating delicious recipes while using Wonderchef appliances. She even gives him the title of ‘Wonderchef’ when he prepares a full meal,” he stated. The TVC will be launched simultaneously across multiple channels including digital. An extensive print campaign is also planned along with prominent presence across general trade, modern trade and exclusive brand outlets. This will create 360 degree visibility for this new association.

Talking about the endorsing duties, Kriti Sanon, said, “I had an immediate connect with the brand. In today’s sedentary world, it is very important to have healthy food and Wonderchef not only enables healthy cooking at home without any hassle but also brings style and modernity to the kitchen. I am overjoyed to have the opportunity to represent the brand. We are what we eat and I look forward to fostering healthier eating habits by being a part of Wonderchef family.”