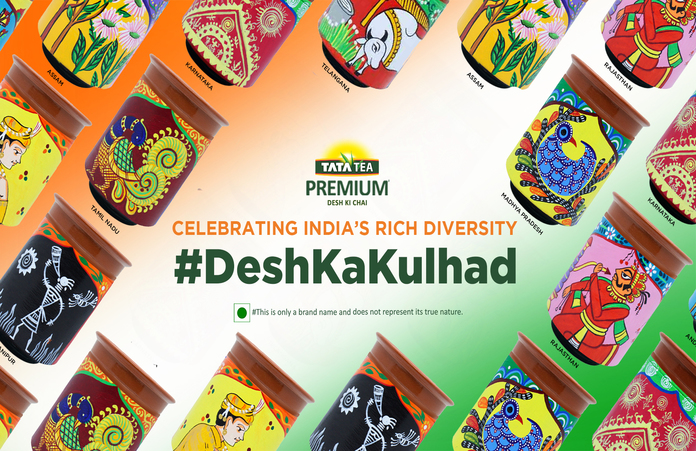 Tata Tea has unveiled #DeshKaKulhad campaign on account of coming Independence day with the insight of ‘Unity in Diversity’. The one and a half minute long ad film pays tribute to the artisans that create the myriad forms of art in the country. As a part of the #DeshKaKulhad campaign, ad film shows the making of the quintessential kulhad, followed by creation of state specific art on each piece. In the background, one can hear a song with a distinct folksy beat to it, while the lyrics describe the different regions of the country. The song has been sung by Rituraj Mohanty The ad was produced by Galloping Horse Productions, directed by Pooraj Kapoor with Prithvi Pai as its creative producer.

An extension of the campaign includes the launch of the DeshKaKulhad collection in partnership with Rare Planet – a startup that promotes the work of local Indian artisans. These special kulhads have been hand-crafted with region specific artforms like Madhubani folk art from Bihar, Warli art form from Maharashtra, Phulkari patterns from Punjab, Patachitra from Odisha, Sanjhi Art from UP, etc. The DeshKaKulhad collection comprises of 26 distinct kulhad designs, each representing different regions of India. Themed around popular motifs and landmarks from each region, each kulhad celebrates a specific artform of that region. These special hand painted kulhads thus serve as a unique canvas showcasing India’s diverse culture and rich heritage.

Detailing about the idea behind the campaign, Puneet Das, president – packaged beverages (India and South Asia), Tata Consumer Products, said, “Kulhads are an intricate part of Indian culture across the country and most of us would have enjoyed an occasional kulhad waali chai. Tata Tea Premium- Desh Ki Chai has always evoked regional pride through its state customized packaging that captures symbols of pride of each state and communication rooted in regional insights. Hence, as an extension from last year, we again used kulhads as a unique canvas for showcasing India’s regional diversity and to continue our support towards India’s artisan community.”