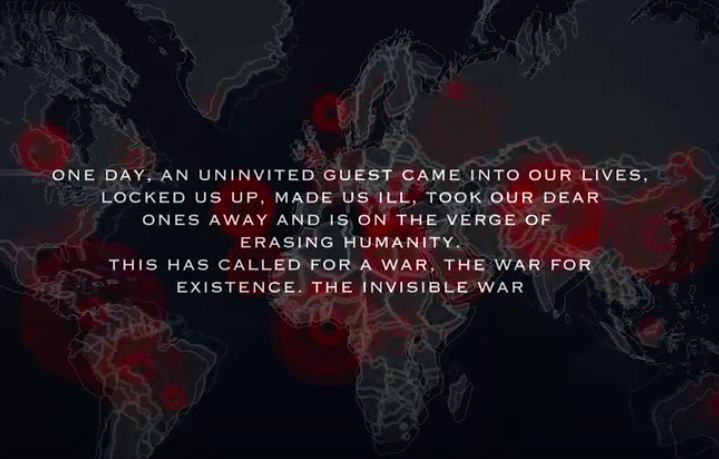 Three men, but two continents apart. But brought together by the ruling scourge of our times, the deadly Corona pandemic, to produce a moving tribute to our frontline health workers, who, at the risk of endangering themselves and their loved ones, are battling one of history’s deadliest epidemics. Two of the young men are doctors — Siddharth Suresh, an ENT surgeon in Thrissur, a central district in Kerala and Maneesh Ahamed, a Dentist, again based in Thrissur; and Sreejith Suresh, a student, based in the UK, who designed the special effects. Siddharth scored, composed, and sang the song, written by Maneesh, who is well-known Malayalam poet and lyricist Rafeeq Ahamed’s son, a legacy, he says brings with it its own sets of expectations. The 4-minute long song, titled Irul Pathayil, is a lyrically power-packed, slow soul-stirrer. In a conversation with K.G. Sreenivas, the two men spoke about what went into the making of the music that meant so much to them.

CREATIVE BRANDS: So you have put together a touching tribute — very resonant with the spirit of the times and very delicately scored. You are a practising doctor yourself and so is Maneesh Ahamed. So the two of you instantly understand what it takes to be at the frontline of this ‘war’. When and how did you first think of collaborating and putting together this tribute?

SIDDHARTH SURESH: We are going through a very dark phase in human history. The hardships faced by health workers during this pandemic is humongous. Being a doctor I get to see and hear from my colleagues from around the world about very disturbing and unheard-of situations. This itself was the sole reason I decided to do a song as a tribute to all our health workers. Besides, we wanted people at large to appreciate the life-threatening risks these frontline warriors have taken on willingly to keep us safe in this invisible war.

CB: You have brought together some fine lyrics, great composition and vocals, and, of course, not to mention some imaginative special effects. How did the three of you collaborate creatively while sitting in three different places, one of you, of course, a few continents away?

SS: Initially, I thought this would never work out. I had already composed the music of this song after which I called my friend Dr. Maneesh to discuss this project. Owing to its underlying spirit, Maneesh was excited and wanted to write the lyrics. I explained to him the gist of the project and sent him my composition. Within a few days, he sent me these amazing lyrics, which perfectly complemented the mood and tune of the composition. At the same time, I was discussing the video with my UK-based brother who began working on the animations. Communication was no hurdle — for we discussed the creative and aesthetic aspects over phone and video.

MANEESH AHAMED: Yes, as Siddharth was saying, I wrote the song specifically written for the album. When Siddharth first came up with the idea, I felt doubtful about writing down a situation of this kind into a song. Eventually, I was moved by the thought of doing our part — however small that may be — in this invisible war against a virus. I wanted this to come out as our way of expressing gratitude to all those frontline workers and for everyone else to realize it’s enormity.

CB: Besides your creative and aesthetic response to the crisis, as a doctor how have you taken it all? Today, numbers have become meaningless, so to speak — 3.8 million affected worldwide and close to 2,70,000 deaths. How have you been processing this extraordinary crisis? And what are Maneesh’s thoughts?

SS: A few years back I watched the movie, Contagion, which for me was purely fictional. I never imagined that we would have to one day face the exact same situation in the near future. In fact, even as a doctor I couldn’t digest this reality. As you said now deaths have become mere statistics. Today, I have come to terms with this reality and have also understood that this was not the time to mourn but to gear up and do what was necessary as this war is not fought with weapons but by medics.

MA: What we are facing today is unprecedented. The only thing which makes sense right now is  to stick to science and evidence-based medicine. This is also a moment of realization for us humans. We have travelled far — to the galaxies, conquered the Everest, created some masterpieces in art and literature… Yet today, as we speak, we are trembling before something that is insignificant to the human eyes — a virus. This is a completely new challenge.

CB: Music or poetry is a great healer. Its resonances take us to a higher plane (of consciousness). Music as a mode of therapy is also well established. But this fight is so completely different. But you need more music to help people’s morale. How do you view the convergence of music and medicine?

SS: The association between music and medicine has been researched for years now. Even I had thought of taking up music therapy as a specialization but it’s still in its beta phase — for it deals with psychological effects which are very difficult to assess. But it is a proven fact that in times such as these, music can be used as a tool for motivation, unity, and peace. I totally believe that music can help in connecting people and help them cope with boredom, loneliness, and anxiety that is naturally prevalent in this situation.

CB: Tell us about your experiences at the frontlines of the crisis — have you been involved with the team at your hospital?

SS: As I am an ENT Surgeon, I am a part of the Covid Committee in our hospital. As per government policy, we screen cases in our hospital and send suspected cases to the government Covid facility. But all said and done, identifying Covid cases is a herculean task due to varying presentations. A mere suspicion about a Covid case in the hospital creates panic among the hospital staff which interferes with the treatment of other patients. What makes matters worse is how people who do not comply with home quarantine rules lie about their travel plans or fudge travel data which is a matter of great concern.

MA: During the earlier days of the pandemic, I was in my college and attended to emergency cases. Once the lockdown was announced, the clinics were closed and I had to return home.

CB: How is Sreejith coping with the crisis in the UK?

SS: Sreejith is in a worse situation as some of his friends have been confirmed positive. But he is holding up and is in good spirits. Even though he is alone, he is making use of his time productively for his creative pursuits and academics.

CB: One final question: Do you plan to collaborate and take this musical project forward? Also, tell us about your musical background/performances. On the other hand, Maneesh, you are the inheritor of a great musical and poetic legacy.

I have always been very passionate about music. I have trained in classical music for almost 10 years for which I am very much thankful to my parents for their support. I have worked with a few renowned musicians for stage shows and studio recording but I never went mainstream.

I am also part of a band called Anonymous, mainly consisting of some of my friends from college. We regularly did gigs in and around Mangalore and had even won the Best Band Award in the All India Medicos Battle of Bands held at Pune back in 2018. Recently, I set up my own studio which has made it possible for me to work at my convenience.

Maneesh and I share common interests in music-making which has played a great part in the success of this song. This song will motivate us to do more quality music.

MA: Even during this tough time, this venture was a beautiful experience and I am  certainly looking forward to more such collaborations. I have been a music enthusiast from childhood and always had a passion for writing, which I think has been one of the perks of being born into the so-called legacy. But then there is also this huge responsibility that is placed on me. I have always felt that there is this certain level of expectation that others have of me. Leaving all that aside, this is something I enjoy doing and something that brightens me up from within.

Start where you are and move forward with Milind Soman in Lifelong’s new movement to fight lazy!