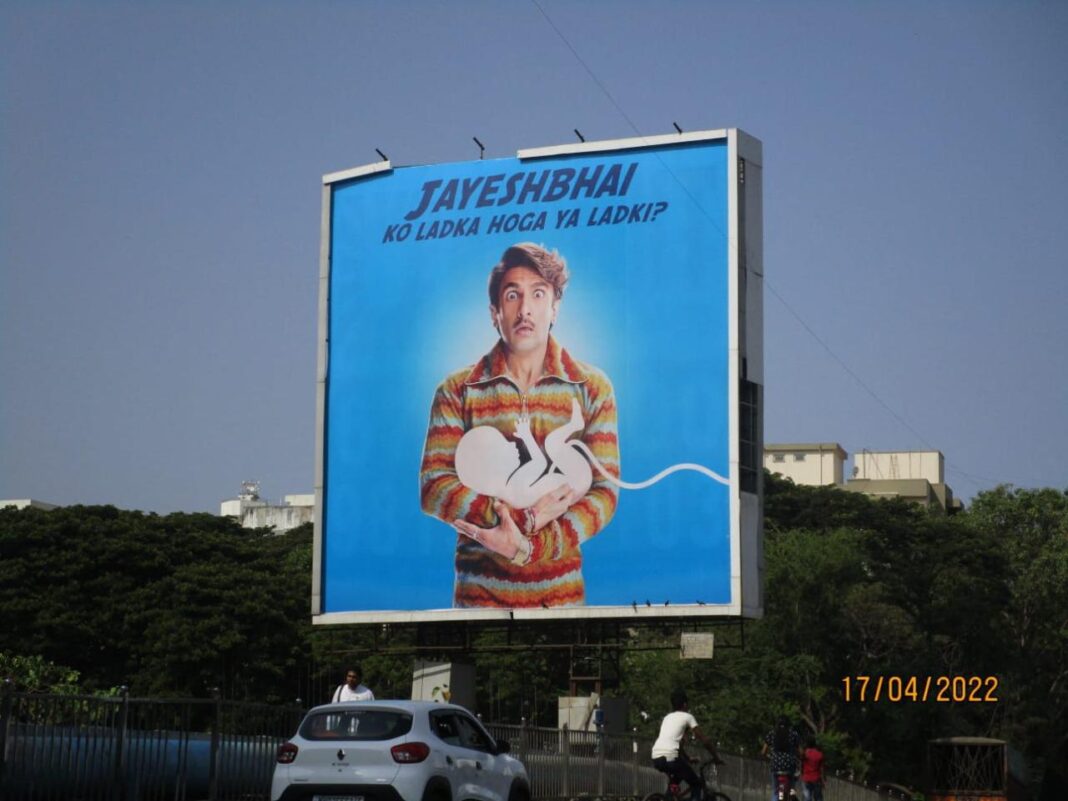 Yash Raj Films has kickstarted their 50 years‘ celebration with their most special film – Jayeshbhai Jordaar, starring superstar Ranveer Singh. The film’s trailer released this week and the initial response suggests it surely has wowed the audience. Before releasing the trailer of the much-awaited film, the iconic production house unveiled an innovative marketing campaign to generate curiosity for their project’s theme – celebrating the girl child!

The marketing team of Yash Raj Films sprung into action by teasing the audiences with a massive nationwide outdoor campaign to capture their attention towards Jayeshbhai having a son or a daughter. Huge hoardings of Ranveer Singh holding a foetus along with a sharp tag line – Jayeshbhai Ko Ladka Hoga Ya Ladki took over the various hotspots in the city, initiating a crucial conversation about the upcoming film as people discussed and engaged with this narrative. Given that the team did not want to reveal much about the film’s plot, these posters created quite the stir about the film, making people wonder of its storyline.

While some assumed the film is about Ranveer’s character of Jayeshbhai Jordaar being hesitant about embracing fatherhood, some thought of it being based on the concept of male pregnancy resulting in big pre-trailer launch buzz on social media among Ranveer’s massive fan base. From Mumbai to Bangalore to Delhi, YRF ensured that all public hotspots and prominent locations including metro stations and bus shelters, among others were plastered with Ranveer Singh’s quirky poster.

After creating hysteria for two days, the team dropped the trailer of the film on April 19, 2022, thus putting an end to the speculations about its storyline.

Commenting on the innovative marketing campaign, Manan Mehta, Senior Vice-President – Marketing and Merchandise, Yash Raj Films says, “Our endeavor was to generate captivating conversation around our film Jayeshbhai Jordaar even before the launch of our trailer. So we decided to employ a potent concoction – a visual of a foetus and asked a pertinent question. A question that not only addressed the core theme of our film but also allowed our audience at large to actively participate in conversations around our campaign.”

He adds, “Thus when Jayeshbhai, played by India’s biggest superstar Ranveer Singh, while holding a foetus raises an inquisitive question we effectually created a substantial Curiosity Gap. Through this campaign, we not only ensured our audience is aware of our film but is also focused on the subject of our film – female foeticide.”

Directed by debutant Divyang Thakkar and starring Ranveer Singh and Arjun Reddy fame Shalini Pandey, Jayeshbhai Jordaar, produced by Maneesh Sharma, is all set to release worldwide on May 13, 2022.