#WhatMakesYouBeautiful, Nykaa seeks to represent the voice for beauty that bears meaning and deeper resonances 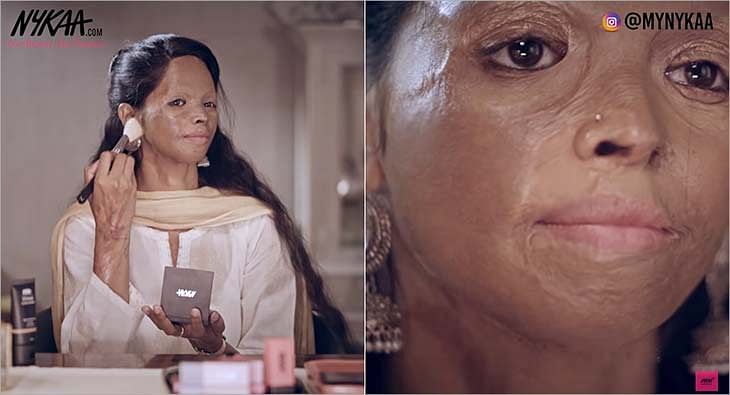 What makes you beautiful? Is it your face, your features, your figure? Or is there more to beauty than meets the eye? Watch how acid attack survivor and activist Laxmi Agarwal challenges the perceptions of beauty that women have been living with for centuries — and teaches us all #WhatMakesYouBeautiful,” says a Nykaa Facebook update alongside a video featuring Laxmi.

Over the years, Agarwal has assiduously campaigned against the sale of acid in the country and her efforts have paid off by helping to control the casual and public sale of acid. As a result, it has become easier for the law to prosecute acid attack cases. For Nykaa, Laxmi was a powerful and credible voice for the message the brand wanted to convey effectively.

According to the National Crime Records Bureau, close to 1500 cases of acid attacks were reported between 2014-2018. Such has been the endemic nature of the crime.

Nykaa’s strategy has been to build on messaging with a difference through the device of pivotal story-telling — something akin to President Obama’s influential keynote address at the 2004 Democratic National Convention that cemented his position as top contender for the presidential contest.

From campaigns such as ‘Qaid’ with Blush and #MyRakshaSquad, among others, Nykaa has sought to differentiate itself in the e-commerce and retail space. It was in 2018 that in collaboration with Culture Machine’s digital channel ‘Blush’ that Nykaa released the video titled ‘Qaid’ that featured India’s first transsexual model, Nikkiey Chawla. The story was told against the backdrop of Karva Chauth and attempted to set in motion a new cultural tradition.

The #MyRakshaSquad video demonstrated the roles played by siblings as they grew up inasmuch as the self-same siblings quarrelled that when it came to the rough patches in life, they were the ones who always came to one another’s rescue.

With #WhatMakesYouBeautiful, Nykaa seeks to represent the voice for beauty that bears meaning and deeper resonances.

Through the short film, Nykaa takes on the traditional standards of beauty women are told are the gold standards of all times. Such perceptions are exacting and trap women as well as men in stereotypes of beauty, often unattainable, constantly reinforced by tradition and media.

Nykaa’s strategy was to encourage women to deconstruct tradition and fashion their own ideas of what was or is beautiful.

Meanwhile, ‘Chhapaak’, directed by Meghna Gulzar and is co-produced by Padukone, ran into a spot of controversy as the top actress went over to JNU and expressed solidarity with the agitating students who were recently brutalised by masked thugs in the wake of the ongoing agitation against the fee hike on campus. The movie is based on the story of Laxmi, who in 2005 at the age of 15 was attacked by a spurned lover.

Founded in 2012 by Falguni Nayar, Nykaa, in 2019, reported a valuation of $743 million, which could give it access to the coveted unicorn club with its next round of funding.

Nayar, a former Managing Director at Kotak Mahindra Capital and who won the coveted ET Business Woman of the Year Award 2019, eschews the double trap of heavy discounting and massive funding, given the nature of the cash-guzzling industry.

Apart from Nykaa Fashion, its women’s segment, the online retailer has also set up Nykaa Man to develop its men’s grooming business alongside Nykaa Pro, a portal for professional beauty consumers.