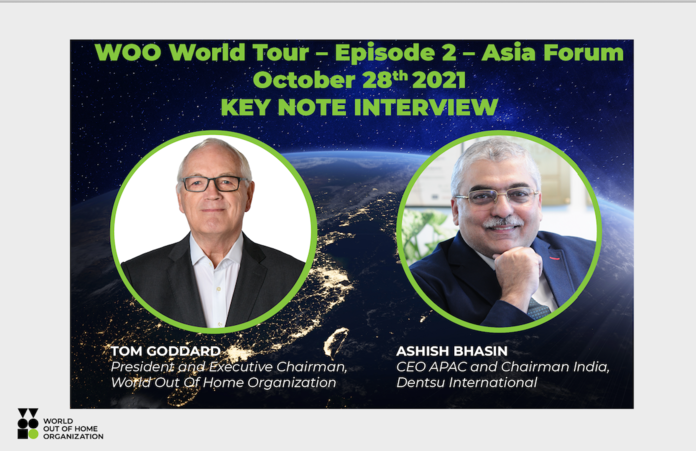 Dentsu International CEO APAC and Chairman India, Ashish Bhasin will open proceedings of the first World Out of Home Organization (WOO) Asia Forum with an in-depth interview with WOO President Tom Goddard. This virtual event will be held on October 28. As with WOO’s recent Europe Forum, the Asia Forum will be virtual and free to WOO members. The October 28 event will be timed to accommodate WOO members in the various time zones.

Commenting on it, Bhasin said, “It’s my pleasure to be a part of WOO’s first Asian Forum. WOO is now a truly global organisation and I hope the Forum contributes to bringing the world of Out of Home even closer together in what are truly challenging times.”

Tom Goddard, WOO President, said, “We are very fortunate that Ashish has agreed to participate in our first Asia Forum. He is one of the pillars of the Asian media industry and it will be truly fascinating to hear what he says about the status and prospects of Out of Home, and the wider media industry, in the region.”

Bhasin, who is also a member of the Dentsu International Global Executive Team, has been a pivotal figure in the advertising and marketing industry for his whole career, now spanning 33 years. He built the Dentsu Aegis Network in India from a 50 member team to 3000, now the second largest Advertising and Marketing Communications Group in India.

Before Dentsu, Bhasin set up several of Lintas India’s businesses for Interpublic and successfully led Lintas India for 20 years.  He was also Executive Vice President, Lowe Worldwide and Asia Regional Director for Integrated Marketing. He has won a record four South Asia Agency Head of the Year Awards at Campaign Asia-Pacific’s Awards in 2015, 2016, 2017 and 2019.